Thomas “Tom” Thomson was a largely self taught artist, and his work bears some resemblance to that of various European post-impressionists such as Paul Cezanne and Vincent Van Gogh. 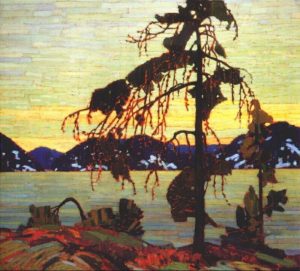 Born in Claremont, Ontario in 1877, he started painting around the age of 12.

Critics state that Thomson’s control of colour and palette was “exceptional”  as he often mixed different, available pigments to create vibrant, and indeed unusual, colours.

Most people agree that his work is instantly recognizable due to this distinctive palette and brushwork no matter what the subject of his work, even though there are now said to be numerous forgeries in the art market as his work has increased in value.

Thomson is widely regarded as one of the most influential Canadian artists of the early 20th century.

In fact he, and indeed his work, directly influenced the highly regarded group of Canadian painters known as the Group of Seven, Thomson is often credited as being part of the group, however this is incorrect as he died before they formed formally.

During his early life he traveled the Ontario wilderness, which was a major source of inspiration for his works.

Thomson honed his drawing and draftsmanship when he was employed as a graphic designer with Grip LTD in Toronto, where in fact several members of the future members of the Group of Seven also worked.

His first exhibition was with the Ontario Society of artists in 1913, and continued to exhibit with them until his untimely death on Canoe Lake in Algonquin Park, which to this day is still shrouded in mystery.

The National Gallery of Canada started acquiring his work, which was a major turning point in his art career.

Like most artists of the modern period, his work has grown in value and popularity since his mysterious death.

In 2002 the National Gallery of Canada opened a major exhibition of his work, giving him a similar level of prominence that they afforded to more widely known and popular artists such as Picasso, Renoir and indeed the Group of Seven in previous years.

Some of his most famous works include, The Jack Pine, The West Wind, April in Algonquin Park and The Northern River.

Emily Carr was born in Victoria in 1871 and is widely credited as being one of the first Canadian painters to adopt a Modernist and Post-Impressionist style.

Her early works were inspired by the Indigenous people of the Pacific Northwest.

Often linked with the Group of Seven (a notable group of Canadian artists), Carr was not only an artist but a skilled writer, experts state she is arguably one of the earliest writers about life in British Columbia as her works chronicled this time.

She studied for a time in Paris, determined to increase her knowledge of evolving artistic trends.

Returning to Canada, as she matured, the focus of her painting shifted from Aboriginal inspired work to more landscape paintings (which draws comparisons with Tom Thomson), she was particularly fond of, and skilled at, painting forest scenes.

During an exhibition on West Coast aboriginal art Carr met members of the Group of Seven, at that time probably Canada’s most highly recognized modernistic painters. 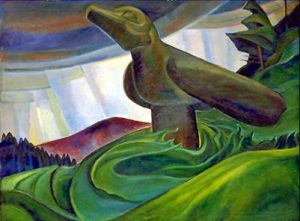 The group welcomed her in to the ranks of Canada’s leading modernist painters, stating that “she is one of us”.

After this chance encounter Carr went on to create most of her recognizable works, in fact art historians claim that this was her most prolific period, as the Group of Seven influenced her direction.

Later in life, suffering from ill health after several heart attacks and a serious stroke, Carr’s work reveal her concerns about the impact of British Columbia’s growing industry on the environment and indeed Indigenous peoples, the inspiration for her early works.

Especially noticeable is her anxiety over the logging industry and its environmental impact.

Carr is considered a “Canadian Icon” and “an artist of stunning originality and strength”.

Her works for which she was best known were from her later decades.

During her varied life, she battled against all odds, as at that particular time she was living in what art historians claimed to be “an artistically unadventurous society” and calling her “a darling of the women’s movement”.

Due to her widespread recognition and influence there are several institutions named after Carr, including the Emily Carr University of Art and Design in Vancouver.

This story is brought to you by Edmonton Mudjacking. Get your concrete leveled by visiting us at www.edmontonmudjacking.com

Melanie Authier was born in 1980 in Montreal, Canada and now lives and works out of Ottawa.

Her painting fuses abstract and representation, and she is fast becoming a rising star in the Canadian, and indeed global, art-world. 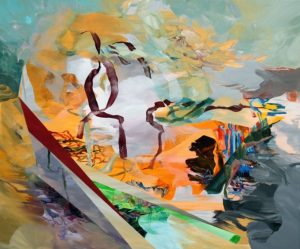 She is predominantly known for deep illusions in her lavish, complex works and has a very sophisticated palette. She is a painter that clearly loves her paint!

Some of her works have been described by art critics as having a landscape quality that consist of many different yet connected parts, some of which almost have a scientific feel to them.

After receiving her BFA from Concordia University and her MFA from the University of Guelph, her work came to wider mainstream attention in 2007, when she had an honourable mention in the RBC Canadian Painting Competition.

Since this Authier’s paintings have been exhibited in various venues nationally, including Modern Fuel, the Ontario College of Art and Design, the Winnipeg Art Gallery and the Carleton University Art Gallery.

“I believe my work references and, at times, wrestles with the after-burn of painting’s past, art history with a capital “A.” It also works to carve out a space for itself in current dialogues and continues to look ahead at painting’s potential. So my preoccupying question is, “Where do we go from here?”

What art lovers everywhere can learn from these words, and indeed her work, is that paintings are not just discrete objects that are easy on the eye.

Authier describes her approach to her paintings as almost “setting up a problem” within them so that she can “produce a response to it that is unexpected” as she plays around with various painting styles, as an artist her paintings clearly indicate her ability to not only handle colour, shape and form or even gesture, her works elicit highly emotional responses from those that view them.